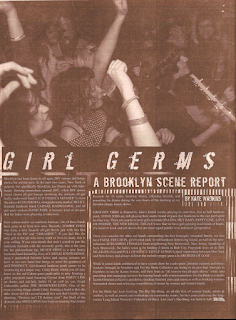 Holy shit! I am so excited to ring in my favorite season with some really exciting news. I just got the October issue of Maximum Rocknroll (the Queer Issue) in the mail. I wrote up a Brooklyn scene report for it and to my surprise... it's the first article after all the regular columns and it's a fucking 2-page spread! Right before queercore in Brazil and an autobiography by Gary Floyd! What in the world?

Also, they forgot to credit the photographers (or maybe they didn't have enough space) - but in order, thank you to Orlando Perez, Dave Sanders and Konstantin Sergeyev for letting me use their photos.
So without further ado... here's the unedited version I sent to MRR. I also uploaded PDFs of the printed version here & here (these files are HUGE - they're 300 dpi and meant for printing in case you can't get your hands on a copy - though for now the issue is available at Maximum Rocknroll!)
GIRL GERMS: A BROOKLYN SCENE REPORT
by KATE WADKINS
(featured in Maxmimum Rocknroll #317) 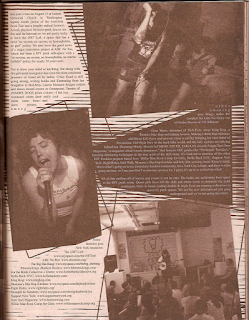 Brooklyn has been home to all-ages, DIY venues & house shows for awhile now. In the past 2 years, New York – specifically Brooklyn, has blown up with lady-bands. Starting somewhere around 2007, when DIY shows found almost-all-girl line-ups involving the intricate all-girl-mathy-indie-rock band Each Other’s Mother’s (from the ashes of Con Amore), alongside bratty punks Cheeky, feminist hardcore band Carnal Knowledge, and all-girl-party-rockers Hand Jobs, among the many solo songwriters – it became kind of obvious that the ladies were planning to take over.

Now extinct and/or on indefinite hiatuses, lots of these bands have gone on to form new ones. Recently, Zombie Dogs was born – a new favorite all-girl thrash jam with relate-able hits like “Nerd in the Pit” and “THRASHIN”. If you feel like the only girl in the pit who loves math or lives to skate, this is your calling. If you miss bands that aren’t scared to pair the seriously feminist with the seriously goofy – this is for you. On the girl-hardcore tip, Death First is a new heavy hardcore band fronted by Jessy of Carnal Knowledge. Jessy’s unabashed feminist lyrics and raging screams are back in her new band that brings to mind the greatness of Antiproduct. Girl-fronted hardcore punk seems to be resurfacing in a major way. Cristy Road, whom you all may know [and love] as the rad Cuban-queer-punk-artist is now fronting a gritty pop-punk band featuring Crystal from Party Line on drums and rad-lady Jackie O. as well as, yes, Frank Unlovable – called The Homewreckers. One of the most exciting things about Cristy fronting a band is that she talks about shit like sexual assault in a way that’s totally raw – shouting, “destroy me? I’ll destroy you!” Jen Shell of the dynamic duo Shellshag has been co-running Starcleaner Records (for 15 years), booking shows, releasing records, and pounding the drums during the wee hours of the morning at our favorite sloppy house shows – proving to us that DIY has total staying power.

Grocery Thief are fronted by Julie's brutal vocals, playing seriously in your face, fast as hell hardcore punk. Hand Jobs are still playing their snotty brand of punk that hearkens to the riot grrrl spirit in a big way. There are countless more girls in bands -- Ina Ina, Hey Baby, Party Line, Love or Perish!, The New Dress, Taigaa! – now that we have girls playing in all kinds of bands, it's easier to book and see shows that are more equal gender-wise and more girl-positive.

Once you consider the other rad bands surrounding the 5 boroughs, extended family, we also have Fatal Erection, girl-fronted rock’n’roll hardcore from Long Island, as well as the now-infamous Screaming Females from neighboring New Brunswick, New Jersey. Speaking of New Brunswick, the ladies seem to be holding it down in Hub City. Pop-punk lives on in The Measure (SA) and Full of Fancy. Little Lungs is stuck somewhere between New York and New Jersey and always delivers the melodic poppy jams a la Archers of Loaf.

While it seems kinda antithetical to have a punk show be a safe space, feminist curators and show-bookers Strength in Numbers and For the Birds Collective are trying to do just that. Strength in Numbers is run by Karen Soskin, and their forte is “all women-run all-ages shows” while also providing tour-managing services for touring bands with women members. For the Birds is a multi-faceted feminist collective & distro, stocking feminist zines and music as well as booking women-dominated shows and releasing compilations of music by women and women bands.

For the Birds has been booking The Big She-Bang, an all-day fest of women bands, artists & crafters, as well as panels and workshops on community issues, for 2 years (relieving the long-extinct Long Island Womyn’s Collective of duty). Last year’s She-Bang was held at ABC No Rio, this year’s will be on August 15th at Judson Memorial Church in Washington Square South (home of the Anarchist Book Fair and a lengthy radical history). Actual, physical feminist-punk spaces are few and far between so we are pretty lucky to have The 1087 Loft, a space that has a strict “no sexism, no racism, no homophobia, no god” policy. We also have the good news of a major renevation project at ABC No Rio, which has been a DIY punk safer-space with a "no sexism, no racism, no homophobia, no macho bullshit" policy for nearly 30 years now.

Not to blow your mind or anything – but along with this girl-punk resurgence has come the more consistent presence of visual art by ladies – Cristy Road is still going strong, writing books and illustrating from her bungalow in Bed-Stuy. Lauren Measure designs t-shirts and draws record covers in Greenpoint. Tamara of Zombie Dogs prints t-shirts (I bet you wondered where their really cool shirts came from!) and show posters, among other amazing gory things, under the moniker No Guts No Glory out of Stolen Sleeves at 538 Johnson.

Gina Marie, drummer of Ina Ina, owns King Kog, a feminist bike shop on Graham Avenue. Making t-shirts that reference old Bikini Kill flyers and artwork, Gina is swiftly bringing her own brand of Revolution: Girl Style Now to the track bike world, and the lady cyclists are rallying behind her. Drummer Mindy Abovitz (of More Teeth, Taigaa!) recently began Tom Tom Magazine, “a magazine about female drummers” – that features DIY guides like “Technique Tuesdays,” teaching drumming techniques in the true spirit of the skill-share. It’s hard not to mention all the other DIY feminist projects based here: Willie Mae Rock Camp for Girls, Holla Back NYC, Support New York, Right Rides, Safe Walk, Momma’s Hip Hop Kitchen, and holy shit, so many more. Keep in mind, this is what's going on in my immediate feminist community. New York City is huge, and there is a ton going on here, so I am sure that I'm missing out on a lot. I guess it's up to us to find out what!

All of this rattling-off of names and events is not in vain – the ladies are reclaiming their space in the DIY punk scene. Queer girls have left the club and dance scene to dominate the punk contingent. Girls in bands leading double & triple lives are running collectives to queer-ify punk spaces. We are the new international girl gang underground and we’re not going anywhere.